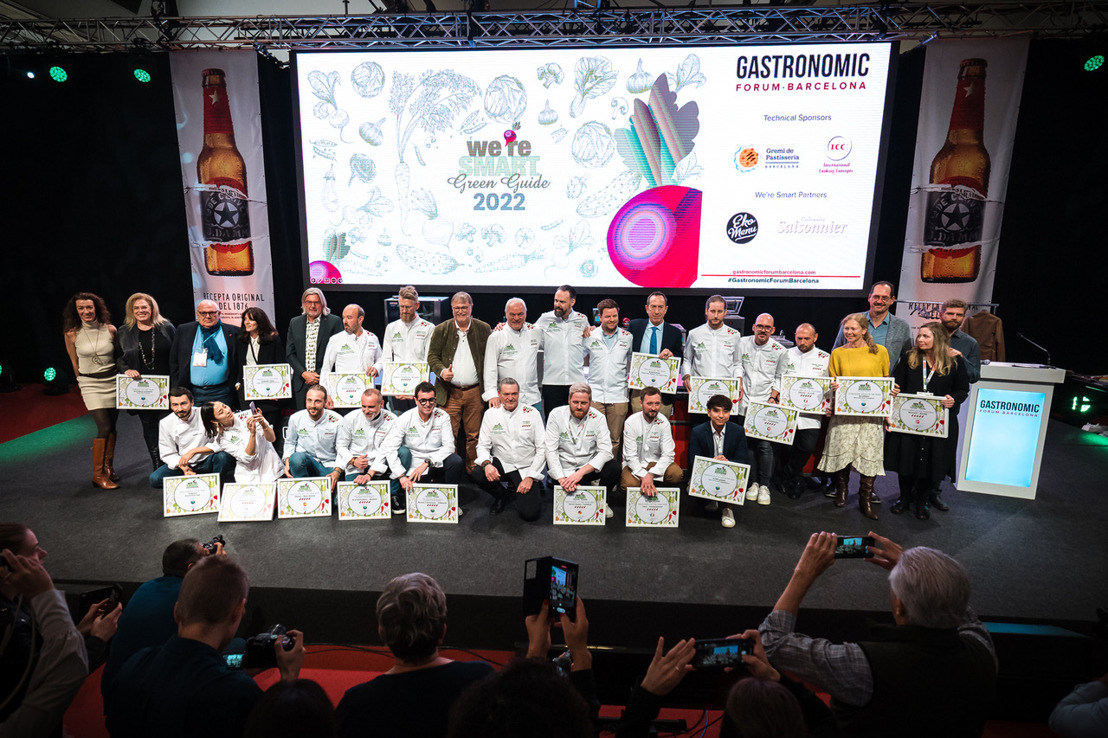 BARCELONA, November 8, 2022 - We’re Smart® World, the indisputable reference in the culinary world of vegetables, reveals the best vegetable restaurants in the world on November 8 during food fair Gastronomic Forum in Barcelona. De Nieuwe Winkel (The New Store) out of Nijmegen, the Netherlands, and headed by chef Emile van der Staak is the new No. 1 and wins the We're Smart Award "Best Vegetables Restaurant of the World.” The restaurant, Eleven Madison Park, from chefs Daniël Humm and Dominique Roy in New York, lands in fifth place this year. Chef Neal Harden's abcV also makes it into the world's top ten. The new We’re Smart Green Guide, the definitive resource to the best vegetable restaurants around the world, was also launched.

We're Smart World visited hundreds of restaurants across the globe last year. The rigorous selection is based on the Think Vegetables! Think Fruit! philosophy, incorporating sustainability, and reducing one’s carbon footprint. The best restaurants are awarded 1 to 5 radishes and receive a spot in the We’re Smart Green Guide, the new edition of which will be announced today in Barcelona.

Chef Emile van der Staak: "Today's choices determine what tomorrow's world will look like. Many of these choices revolve around food. That's why we believe in botanical gastronomy: turning ordinary plants into finger-licking dishes. We need to look no further than the plate to help save the planet. Eating less meat and dairy is the most effective way to regenerate our ecosystems and prevent their destruction."

Frank Fol, founder of We’re Smart World: "We are noticing increased global interest in plant-based cooking. A growing number of chefs are discovering the culinary potential and ecological benefits of fruits and vegetables and featuring them on the menu with impressive mastery. Through the We're Smart World ecosystem, we bring businesses and consumers together around health, ecology and sustainability, in addition to restaurants. We hope this will also inspire other potential partners, too."

The We’re Smart Top Ten of the Best Vegetables Restaurants in the World, awarded with five radishes.

The We're Smart Top Ten Best Vegetable Restaurants in the United States who have received the top score of five radishes:

We’re Smart® World is the undisputed worldwide culinary reference when it comes to fruit and vegetables. The brainchild of Frank Fol, The Vegetables Chef®, the organisation recognises and promotes individuals, restaurants and other businesses that put fruit and vegetables centre stage in the world of food.

Published annually, the culinary We’re Smart® Green Guide showcases the world’s leading ‘fruit and vegetable’ restaurants (restaurants committed to an innovative approach and exceptional taste combinations with vegetables) and ranks them from 1 to 5 “Radishes”. The annual We’re Smart® Awards recognise the year’s best restaurants and organisations.

The We’re Smart® Academy offers the world’s best ‘fruit and vegetable’ chefs a forum for sharing their knowledge in healthy, ecological food. These are just some of the ways in which We’re Smart® World contributes to nurturing a healthy, sustainable and ecological world. We're Smart® World was chosen by the Belgian government as one of the official SDG Voices: designated ambassadors of the UN’s Sustainable Development Goals.

Find more solutions for a better, healthier and more sustainable world at weresmartworld.com